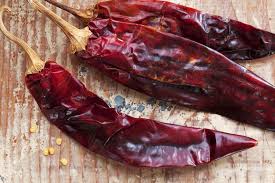 One of the most popular Mexican peppers is the guajillo chile. This kind of dried chili comes in as the result of dehydrating miraflor chile. Guajillo chile is actually widely used in Mexican gastronomy; for example it is the main ingredient of several kinds of salsas, adobos and moles. California chili, also known as Anaheim chili, is a pepper original from Anaheim, California, as its name suggests. It is believed to be the same as guajillo chile, however, there are some differences between these two peppers.