Difference between Alligator and Crocodile 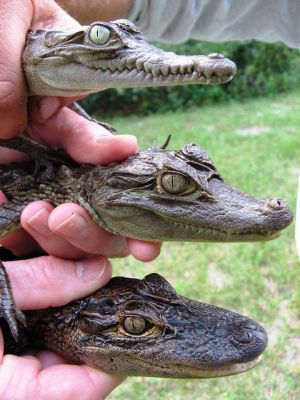 From top to bottom: crocodile, caiman and alligator

If proper attention is not payed, one might confuse an alligator with a crocodile. However, it just takes a look at their snout to be able to differentiate one from another. Crocodiles have a long, pointed, v-shaped snout, while alligators, on the other hand, have a rounded U-shaped snout. Alligators' upper jaw and lower jaw have the same size of teeth, which makes it almost impossible to close their teeth. The structure of the jaw makes them appear like they are always grinning.

Alligators and crocodiles used to be genetically mutual, but now they are genetically separated. This makes it impossible for both species to mate together; therefore, they are different from each other.

Alligators belong to the family Alligatoridae, the genus Crocodilian, and the class Reptilia. They have a maximum speed of 32 km/hr when in water and a lifespan of 30-50 years. Alligators have 2000-3000 teeth in a lifetime, which they periodically lose and regrow. They also have a bite force of 2000 lbs per square inch and are generally grey, green-ish, although they change color as they get older. Female alligators drop an average of 32-46 eggs, incubation lasts anything between 63 and 68 days. For a male alligator, the average size is 8 feet and 11 feet in female alligators.

Crocodiles are large semi aquatic animals, and they have a lifespan of about 50-70 years. They have the scientific name crocodlinae. They have a light olive green color. They have a body shape that allows only the face to be above water while the rest is inside the water. They possess mighty jaws with a large number of teeth. They also have webbed toes that are covered with very sharp claws. 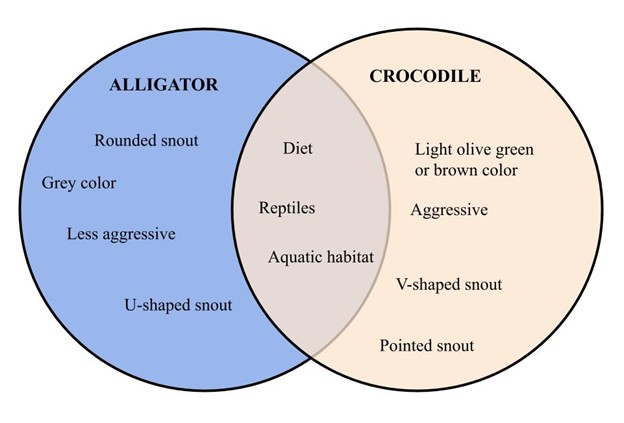