Difference between Communism and Fascism 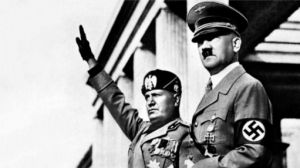 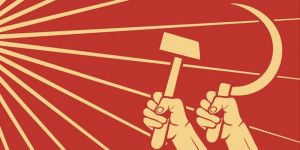 Communism is a system based on the theory of economic equality and advocates for a society where there is no differentiation between the wealthy and the poor. In contrast, fascism is based on a top-down system with rigid class roles which is led by a dictator. The theory of communism originated from Karl Marx and Friederich Engels in their 1848 book, “The Communist Manifesto”. They proposed a communist system whereby all property is communally owned by a classless society. They believed this would solve all societal problems caused by inequality and exploitation. Fascism is based on the glory of a nation. It originated from the nationalist movements of the late 19th century. Fascist regimes are commonly characterized by extreme militaristic nationalism as well as economic policies that favor the rich and opposition to parliamentary democracy.

Both communists and fascists are against the democratic system. However, fascist leaders like Hitler and Mussolini participated in a political election before becoming complete dictators. Communists on the other hand are more in favor of democracy. Communists believe that social classes should not exist and that private property should be seized for control by a communist government. They are also against rigid gender roles.

From an economic perspective, communists are totally anti-capitalist who favor equal wealth distribution and advocate for everyone getting an equal share from labor. Fascism supports private enterprise but its main goal is to glorify the state. The well being of society as a whole is favored over individual rights in both social systems. Countries like China, Cuba, and North Korea are mostly known for practicing communism. However, China has adopted a basic capitalist system to grow their economy. No country is known to be practicing fascism but Neo-Fascists exist in countries like America. 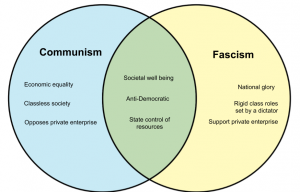