Difference between Skype and Facetime 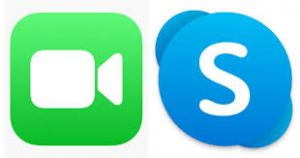 Which one is best for you?

Video calling has become the norm these days. That is no overstatement. The number of people switching from conventional calling to video calling is on the rise these days, owing to increasing internet penetration and adoption of smart devices. Skype was the first software to offer video calling but over the past few years, Facetime has emerged as a major player.

The next major difference is the fact that Skype offers its services across a wide range of platforms, devices and operating systems but Facetime caters only to the users who own an Apple device. Hence, the user base of Facetime is much lesser than that of Skype.

If we take features into consideration, Skype is the clear winner here as it provides group calling (up to 25 users) with its paid subscription. Facetime on the other hand is a one-on-one video calling service, though it offers conference calling through voice calls. Skype allows its users to transfer files while Facetime does not. Also, Skype allows to make calls to land-line or mobile phone at a nominal cost, whereas Facetime does not.