Difference between Stock and Broth 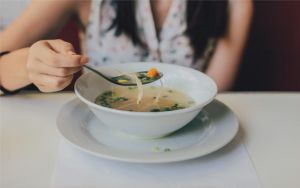 Broth and stock are similar, but not the same.

Broth and Stock are often interchangeable terms used. These are flavorful liquids and can be used in cooking sauces and soups. They may look the same though but have different ingredients, different tastes, and different liquid concentrations. While the stock is specifically made from the bones, we cannot say the same for broth as it may or may not contain bones to cook. The broth is always backed up with adding spices and herbs to add to its taste and flavor. Let get to know more about the two.

Stock is made from bones. When bones are boiled for longer periods its collagen and bone marrow are released into the boiling water. It is thicker and has a more gelatinous consistency. It takes almost 6-8 hours to be cooked as mainly bones are involved and they take a longer time for collagen to be released. Bones can be of any type, chicken, fish, pork, or beef. Some vegetables can be added to give it more flavor, these include onion, parsley, thyme, carrot, etc. After this stock may look like broth but it will be thicker due to bones. Stock can be used in dishes such as gravy, sauces, soup. Cooked legume or grains or braising liquids.

Traditionally speaking, the broth is made by simmering meat in the water. It may or may not contain bones, but it surely has vegetables for added flavor. Almost any meat type can be used to cook broth but most common flavors include meat, chicken, and vegetables. Due to these ingredients, people can drink plain broth to cure illnesses such as cold and flu. It helps loosen up mucus. Since the meat becomes tough when cooked for a longer time, it should be cooked and off the flame after no more than 1 hour except the bone broth which takes longer than plain broth. You can simply remove the meat from it and can use it for other purposes. It is more flavorful and can be used in cream sauce, dumplings, gravy, soup, stuffing, stir-fried dishes, and few others too. 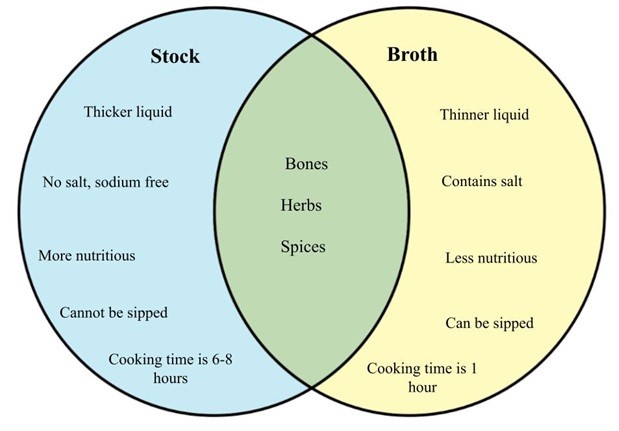