Difference between Trump and Obama 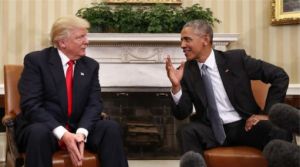 Both Trump and Obama are well-known throughout the world due to their unique position of being presidents of the United States of America. Here are some distinctions between these men of power.

Barack Obama served as the 44th president of the U.S. during the 2009-2017 term. He is also known as the first African-American to serve as president. Before his presidency, Obama was an attorney as well as a senator based in Illinois.

He was succeeded by Donald John Trump, who became the 45th president of the United States. He is also known as the oldest and richest person to become president. He is also notable for being the first president who had not rendered military or government service before his post.

Both politicians also have opposite views when it comes to different policies and beliefs. This is also reflected in their political stance. Wherein Obama is a Democrat and moderately liberal, Trump is part of the Republican party and is more inclined to conservative views.