What is Szechuan Chicken? 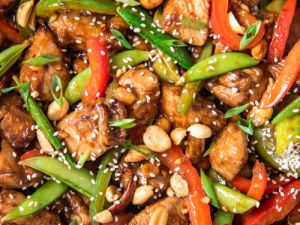 There are countless ways to prepare a chicken. It can be fried, boiled, grilled, baked, and stuffed among many other things. In addition to that, each culture has its own unique method of cooking and seasoning a chicken. In this article, we will feature the Szechuan chicken.

What is Szechuan in the First Place?[edit]

It is also called Sichuan or Szcehwan cuisine. This cuisine hails from the Sichuan province located in southwestern China. Its main characteristics are its pungency, spiciness and flavor. Szechuan dishes also tend to incorporate chilli peppers and garlic, mainly because the province possesses high humidity and is usually rainy.

Because of the weather in the province, it has also paved the way to use food preservation techniques like pickling, smoking, drying and salting. The cuisine also implements cooking methods such as sauteeing, stir-frying, dry braising, soaking in water, and frying then braising in corn flour sauce.

Szechuan chicken is known for its aromatic and citrus-like taste. Just like many other dishes, it is sweet and spicy at the same time. Because of the spices, Szechuan chicken provides a tingly sensation in the tongue. Common spices and seasonings include dry sherry, Worchester sauce, soy sauce, sesame oil, garlic, green onions, red bell peppers, cayenne pepper, and red chilli. A distinct ingredient of Szechuan chicken that separates it from Hunan chicken is the Sichuan peppercorn. It also uses less vegetables and differs in appearance because of its reddish color.

Szechuan chicken is typically marinated, then stir-fried, steamed and braised. The chicken is cooked along with the marinade. Most of the ingredients used in cooking Szechuan chicken have been preserved through drying, salting or pickling. It is also prepared using a lot of chilli bean paste to lend it a salty-sour flavor. Additionally, a lot of garlic and onions are used when cooking this dish. As a result, the final dish is a sweet and tingly dish with onion and garlic flavors.