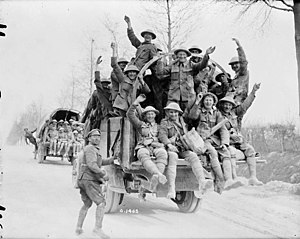 Canadian soldiers cheer after the capture of Vimy Ridge.

World War I is considered as one of the largest conflicts in history, being categorized as a global-scale war that involved many countries and hundreds of millions of human life.

Who Were Involved in World War I?[edit]

The First World War was a war between two military factions - the Allies, which consisted of Britain, France, Russia, Italy, and the United States, and the Central Powers, which was made up of Germany, the Ottoman Empire, Bulgaria, and Austria-Hungary. Various political alliances and historical events also led to the involvement of other countries in the large-scale war.

How Did the War End?[edit]

The war marked its end on November 11, 1918 at 11 am, when Germany signed a peace agreement, also known as an armistice, which was prepared by France and Britain.

On March 1918, Germany implemented the “Michael Offensive”, a tactic that was able to push Britain back but was eventually overturned by France and Britain through a counter-attack. In addition to this, The Triple Alliance (composed of Germany, Austria-Hungary, and Italy) was losing its power due to the failures of the Schlieffen Plan in 1914 and the Verdun Offensive in 1916. The United States also joined the war on the side of The Triple Entente (Great Britain, Russia, and France). Additionally, Italy crossed over to side with The Triple Entente due to strained relations with Austria-Hungary.

The strengthened military power of the Allies led to the German army leaders to request the government to cease fighting. On November 9, 1918, Germany’s leader Kaiser Wilhelm abdicated from this position. Two days later, Germany signed the armistice and the four-year war eventually concluded.

There is no specific country that can be named the winner of the war. In hindsight, the winners are the Allied Forces.